I wrote my first poem in 1993 to go along with a special song that our Gospel group had added to their performance repertoire. The poem is "A Father's Prayer!" (It can be found toward the bottom of this page.) From that point on, the words began to flow through my fingers onto the keyboard and into the computer with a consistent fury. Poems, books, messages, curriculum, dramas, skits, ministry projects and even a dissertation freely flowed through my high-tech pen of the 20th century. Nearly everything I share is based on my faith in Jesus Christ. You see nearly all of my life, I have inspired, mentored, forgiven by grace and called to share the impact of God's mercy in this life. It all started as a teenager, when I accepted God's gift of salvation, offered through the life, death and resurrection of the  Author of my faith, the Lord, Jesus Christ!

“Looking unto Jesus the author and finisher of our faith; who for the joy that was set before him endured the cross, despising the shame, and is set down at the right hand of the throne of God.”                 Hebrews 12:2 KJV 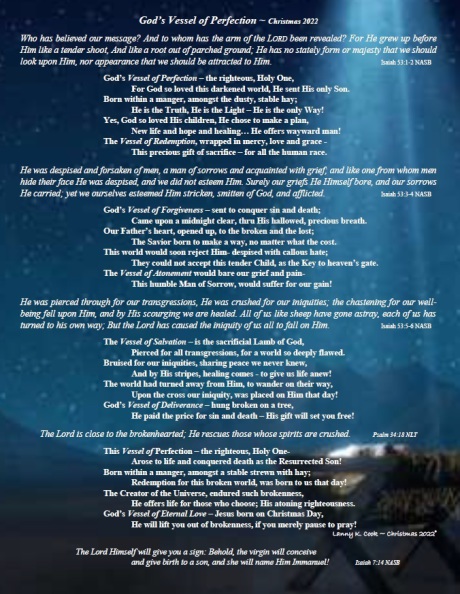 A Great Cloud of Witnesses   Examples of a Faithful Witness

"Therefore, since we are surrounded by such a great cloud of witnesses, let us throw off everything that hinders and the sin thatso easily entangles. And let us run with perseverance the race marked out for us."  Hebrews 12: 1 NIV

One of the most unforgettable witnessed to Christ that I’ve ever known was an avid mountain climber. His name was Vince Bousselaire. Pastor Vince was an amazing man of God, as well as, a little dynamo. Nothing seemed to ever slow him down. He was like an energizer bunny who would just keep going when everybody else was drained. I went on a short-term mission trip to Alaska which was led by Vince in the early 2000’s. I was a last minute replacement for someone who had to bow out of the trip just weeks before it was scheduled to leave Denver. During that trip, I learned a lot about the man Vince, along with the motivating factors that kept him focused on serving his Lord. He shared with me a vision quest for placing the Word of God on the highest peak on each of the seven continents. In preparation of his quest, he trained by climbing all 53 of the fourteeners in the state of Colorado. On each of those peaks He placed a Bible. It was his undying belief that the word of God needed to be proclaimed from the highest mountains throughout the world. Vince completed his initial goal of placing a Bible on the highest peak of each of the 7 continents, including Mt. Everest. Vince attempted to climb Everest twice, but due to altitude sickness he had to hand his dream off to a fellow climber who reached the summit, placing the Word of God on the highest peak in all of the world. The irony of this tag team approach on the highest and most deadly mountain top on all the earth had to do with the colleague Vince choice to share in this venture. The man that completed Vince’s quest was Jewish.

Not too long after the Bible was placed on the highest peak in the world, Vince continued his calling by making a trip to Switzerland. His objective was to place a Bible on the top of the Matterhorn, a mountain that borders Italy and Switzerland. Vince had reached the summit of this majestic piece of real estate and placed a Bible, securely wrapped in plastic at the pinnacle of this magnificent part of God’s creation. As the team made its descent from this adventure, Vince and another climber were blown over the edge of a cliff by a treacherous gust of wind. This happened on a non-technical part of the descent, so neither of the climbers were tethered with safety ropes. The 1,000 foot fall claimed the precious life of Vince and a fellow climber.

Just a week before Vince had left for this mission trip, he had shown me some pictures he had taken on a training climb on a local fourteener called Longs Peak. After showing me a picture of what is referred to as the chute he shared a profound thought with me. The chute is a place on this particular mountain that has a very narrow path going from one side of the chute to the other. Off of one side of this path, the chute drops nearly straight down for a thousand feet. Vince mentioned how eerie that would be to lose your footing, causing you to plummet a thousand feet to your death. Just a few weeks later, his prophetic thought became a reality.  But I know, that he didn’t make his descent alone. His Lord was with him all the way and was there to carry him home at that very moment when he took his final breath.

O Lord, You have searched me and known me. You know when I sit down and when I rise up; You understand my thought from afar. You scrutinize my path and my lying down, And are intimately acquainted with all my ways. Even before there is a word on my tongue, Behold, O Lord, You know it all. You have enclosed me behind and before, And laid Your hand upon me. Such knowledge is too wonderful for me; It is too high, I cannot attain to it. Where can I go from Your Spirit? Or where can I flee from Your presence? If I ascend to heaven, You are there; If I make my bed in Sheol, behold, You are there.  If I take the wings of the dawn, If I dwell in the remotest part of the sea, Even there Your hand will lead me, And Your right hand will lay hold of me.   Psalm 139: 1-10 NASB

When I heard the devastating news about Vince, this poem came to my mind. It didn’t take too long before it appeared on the computer screen as you see it now. God in his infinite wisdom took Vince home to his eternal reward. We can’t understand why and those that cared for Vince will always have questions. None of us will find the answers to those questions until we too stand before our Lord and are reunited with our loved ones who have gone before us. Maybe at that moment in the eternal timetable of heaven, we won’t even care. We’ll forget all of our questions because we will be overwhelmed by the love, grace and mercy of finally being in the presence of our Lord and Savior. 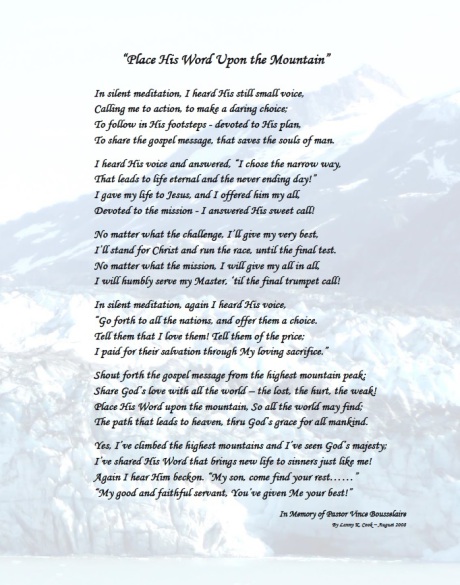 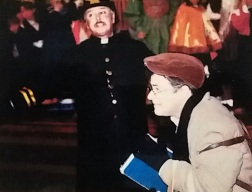 For many years I was involved in a drama ministry referred to as Faith on Stage at Faith Bible Chapel in Arvada, Colorado.

During that time I became friends with a cast of amazing people. Amazing in regards to their relationship with Christ, as well as, their gifts and talents in the field of creative arts. One of those individuals was a man named Jack. He was the most gifted actor I had ever been around. In fact, his acting and creative abilities could best be described as "brilliant!" His ability to define the characters in each of his assigned roles was an incredible gift.

The role that truly displayed his acting ability was the year he played a blind beggar who encountered Jesus. Jack's ability to get into character for a role and stay in character from the moment a rehearsal began until it ended never ceased to amaze me. But the most endearing characteristic of Jack is best described as he was truly "a man after God's own heart." His faith in Jesus Christ was truly inspirational. With his passing the Lord placed this poem on my heart. I know where Jack is at this very moment. He has left the confines of this world, but he is rejoicing like never before as he has entered into eternity to dwell in the house of his Lord and Savior, Jesus Christ.

I felt compelled to share this poem in memory of my dear friend, Jack. I pray it provides you with a bit of encouragement and hope for the drama you encounter in your own personal world. May God bless you, forever and always! 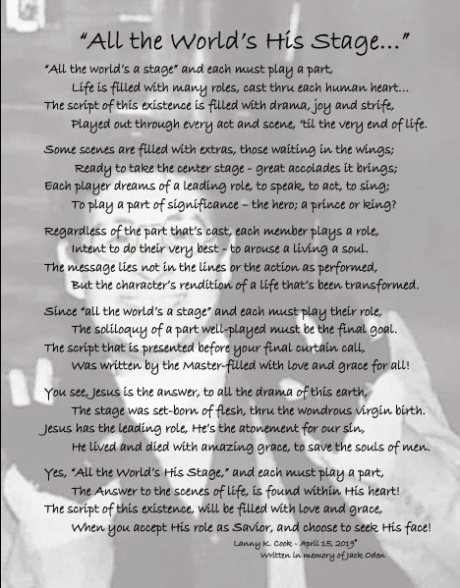 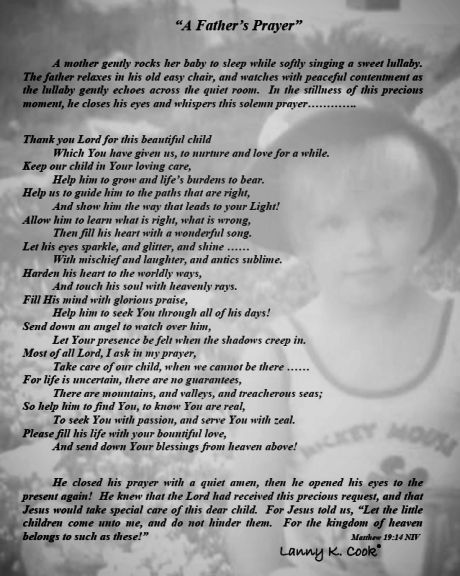 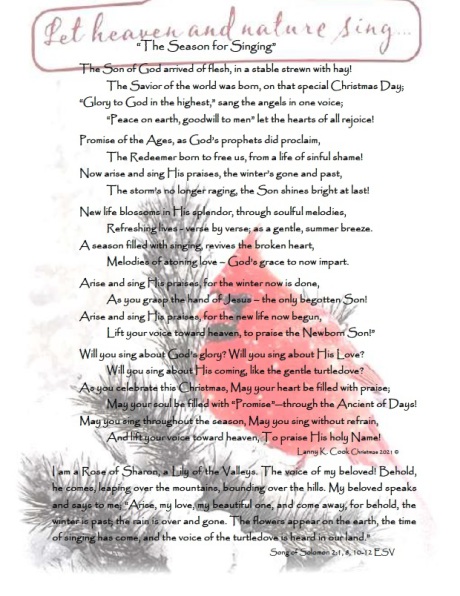 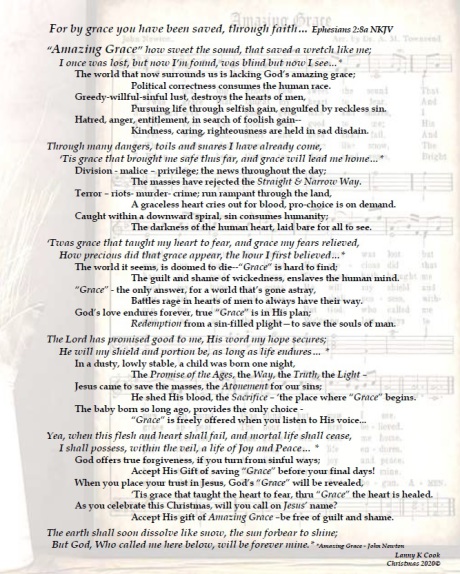 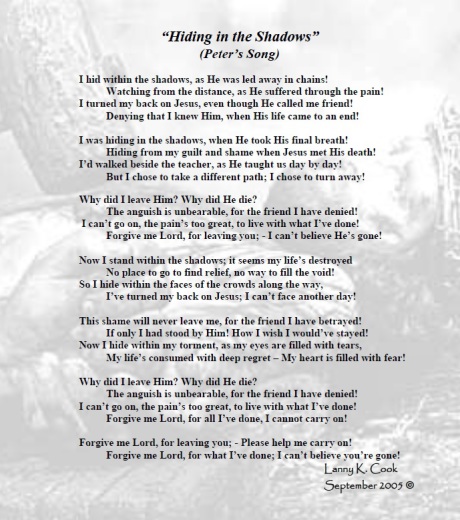 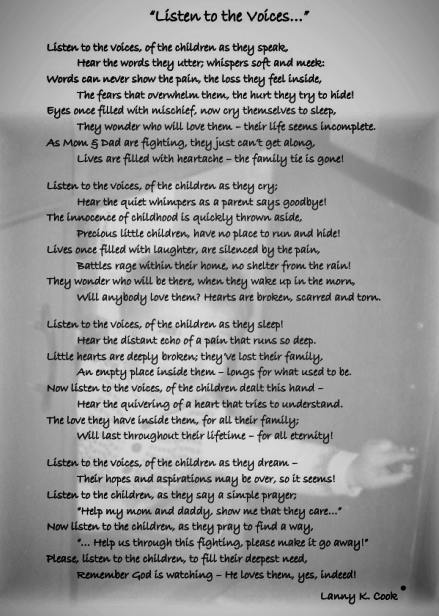 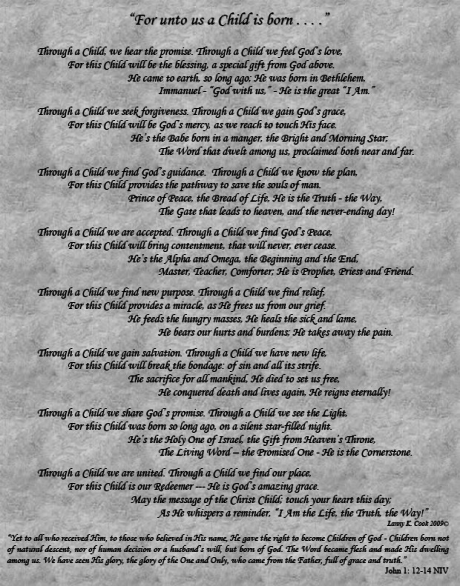 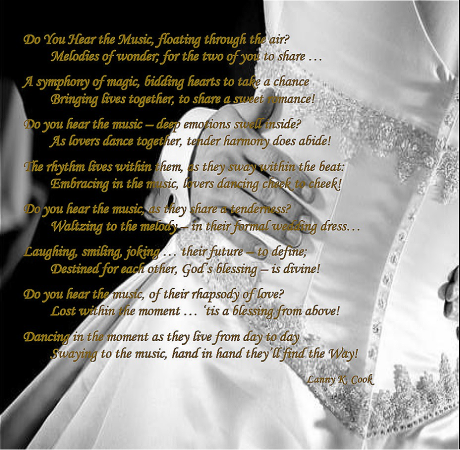 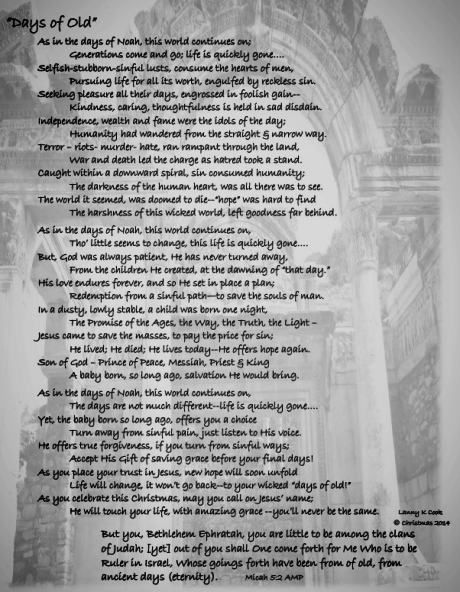 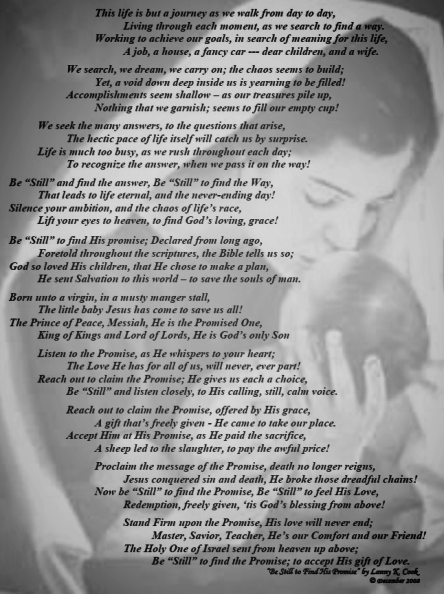 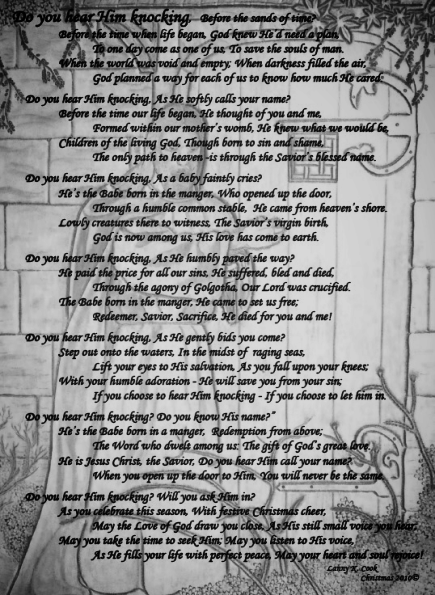